theZoomer is VisionTV’s flagship 60-minute current affairs show. Created and launched in 2013 by ZoomerMedia founder and VisionTV executive producer Moses Znaimer theZoomer is for and about Canadians 45-plus. 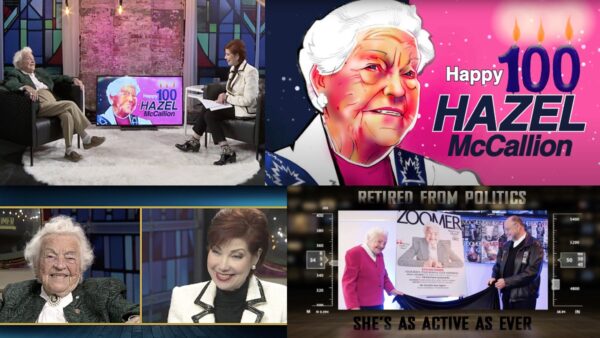 She’s a legend of electoral politics and was the beloved Mayor of Mississauga for 36 years. She’s not only a role model for women in politics and women in power, she is also a model for modern aging and a cover girl of Zoomer Magazine. “Hurricane” Hazel McCallion celebrates her 100th birthday on Valentine’s Day and Libby Znaimer had the honour of sitting down with this great Canadian for a one on one chat about her lifetime of achievements and secrets to longevity. Happy Birthday Hazel!

Hosted by Libby Znaimer and Marissa Lennox and featuring a changing weekly round table of diverse, knowledgable and influential experts, theZoomer offers groundbreaking, intelligent, and hard-hitting discussion on how Canada’s most powerful audience is shaping the agenda and changing Canada and the world culturally, socially, politically.

Visit thezoomertv.com for much more including previous episodes available to watch online.

Sign up below to join our Studio Audience RSVP List to be first to know when we’re producing new episodes of theZoomer you can see live!