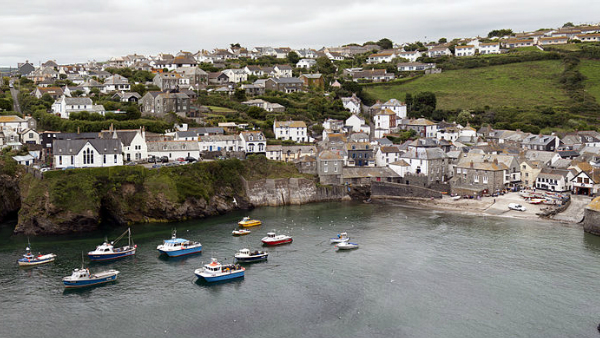 For 8 glorious television seasons, Doc Martin has been set in the idyllic, seaside Cornish village of Portwenn.

In reality, Port Isaac is the stand-in town for Doc Martin’s home. Every season of the show has been filmed in this small fishing village which is located in Cornwall on the wild, windswept Atlantic side of the southwest peninsula of Great Britain. Over the years, Doc Martin fans have become enamoured with everything Port Isaac from hilltop to harbour.

The surgery, the school, the police station, Bert’s restaurant, Aunt Ruth’s house – they all exist in Doc Martin’s Portwenn but, which actual places in Port Isaac play their well-structured roles? Let’s discover them and perhaps, you’ll travel to discover Doc Martin’s Port Isaac sometime too.

Port Isaac retains much of its traditional character. The narrow laneways are lined with small, whitewashed cottages. There are several restaurants that specialize in local seafood. The population is just 721. The town attracts many tourists who want to walk the high cliffs and partake in the Doc Martin experience. If you’re looking to plan your own, start with these locales.
The Harbour

Doc must pass the harbour anytime he goes from his surgery to downtown. Yes, you can park on the beach but be mindful of the tides or the ocean might swallow your car. Occasionally, local singing group, Fisherman’s Friends, perform concerts on this beach and sing sea shanties.
The School

The school is not actually a school at all. It’s actually a hotel and restaurant called…The Old School. The menu is full of local seafood and the hotel has five kingsize rooms named after subjects (Latin, English, Biology, Art & Mathematics). They’re even licensed to perform marriages. A Doc Martin themed wedding needs to happen immediately!
The Bert Large Restaurant

If the school is a restaurant then the restaurant must be a school! No, unfortunately it is a private residence and apparently even the show’s film crew is not allowed inside. This is typical, however, since most of these buildings are only used for their exteriors. The interior shots are done in a converted barn fifteen miles away.
The Pub

From time to time, the people of Portwenn will grab a pint at the The Crab & Lobster. Luckily, this is real place although in Port Isaac it is known as The Golden Lion. It is the town’s only official pub and it was used for the interior shots in season one.
The Doc Martin Cottage

Its real name is Fern House and – surprise, surprise – it’s not a doctor’s surgery or a even  private residence. It is a cottage for rent, located exactly where it should be, on top of a hill on the South shore of the harbour.

In conclusion: you can live in Doc’s house, drink at his bar, and get married at his school. Get on this theme wedding, you lovebirds!
Watch Doc Martin on Vision this fall/winter. Seasons 7 & 8: Tuesdays at 8pm ET/5pm PT through Jan. 1, 2019.
One last thing! Don’t miss the premiere airing of Season 2 of the smash hit, royal period drama, Victoria, starring Jenna Coleman and Tom Hughes, Wednesdays at 9pm ET from Sept. 26 through Nov. 28, 2018. Here’s a taste: