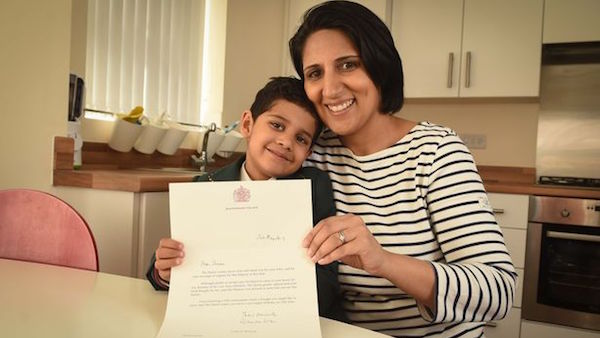 For some of us, the best birthday parties we ever had were as children. All of your friends would pour into the house, gifts would fill your eyeballs and there’d be so many goodies to eat, you’d swear someone robbed the sweets shop. As amazing as all of that is, one kid wanted to take his birthday party to the next level – by inviting Queen Elizabeth II to it!

Young Royal family fanatic, Shaan Dulay of the West Midlands in England, wrote a letter to Queen Elizabeth II to invite her to his fifth birthday on June 25.

“He had been learning about history at school and that the Queen was the longest reigning monarch – things like how she was when she first started,” said Shaan’s mother, Baljinder, when explaining her son’s enthusiasm for Her Majesty during an interview with Indian Express. “He came straight home and started reeling off all the information to us.”

On March 13, Shaan sent off his adorable invite to the Queen. A portion of it read: “Dear HRH Queen Elizabeth, I think you are the best Queen in the world. I really like your crown and the red cloak you wear; it’s like a superhero. I need to talk to you about horses, planes and the poor children.”

As the calendar turned to May, doubt began to creep in regarding whether or not the Queen had seen the letter and if she’d respond to it.

Well, on May 3 Shaan received a very important letter with the Royal seal upon it. At last, a response! 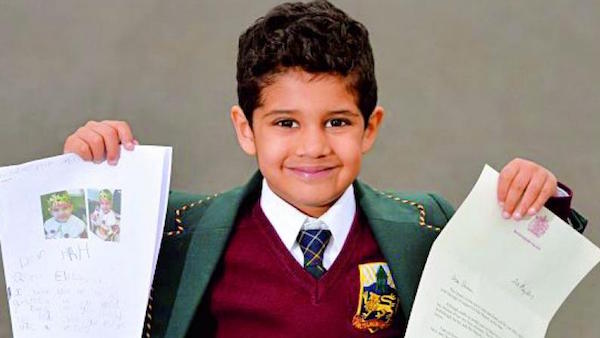 It read: “Although unable to accept your invitation to come to your house for tea because of her very busy schedule, the Queen greatly appreciated your kind thought for her and Her Majesty was pleased to learn that you too like horses. The Queen hopes you have a very happy birthday on June 25.”

Although Shaan’s request didn’t pan out the way he would’ve hoped, the correspondence with the Queen still meant a lot to him.

“I was a bit disappointed. But I was very happy she read my letter,” explained Shaan. “I really like the Queen. I like her horses and her dogs. I’m going to her house in the summer. I hope I meet her then.”

“He was over the moon to get a reply,” added Baljinder. “We will be taking him to see [Buckingham] Palace in the summer and he can’t wait. I have had to calm him down and tell him there is a little while to wait yet.”

You can see Shaan’s entire letter in the photo gallery below.

If you are also a fan of the Royal family, please join us Tuesdays at 8pm ET/5pm PT for the breathtaking British period drama, “Victoria”!