50 Ways to Kill Your Mammy S1E6: Through the Trees and Beneath the Waters of Cambodia 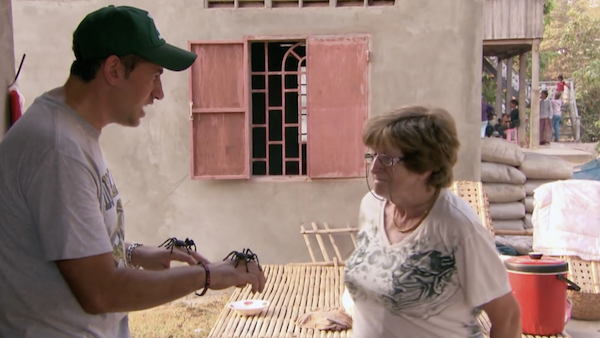 To date, Nancy has survived everything from an up-close alligator encounter, to a bumpy white water rafting ride, to flying an old military plane. All that Nancy’s son Baz has committed her to has thus far not killed her. If anything, all of these adventures have made Nancy stronger.

Thus, Baz feels like it is time to up the ante. Flying into Cambodia, Baz plans on subjecting Nancy to tasks that could turn her stomach and her fears into uncontrollable forces of nature.

Naturally, then, why not start off the trip by eating some bugs? Nah, the duo aren’t picking bugs off the street and chowing down, rather, they’re visiting a farmer’s market of sorts and eating already cooked creepy crawlers. Baz is convinced that Nancy will have a meltdown when confronted with these insect appetizers – at first, all signs point to that happening. However, after some minor encouragement and reassurance, Nancy begins to chow down on creatures you’d usually crush with a shoe or smack with a swatter.

Seeing that Nancy was remarkably comfortable with eating bugs, Baz thinks it’s time to see how close his Mammy is willing to get to a tarantula. What better way is there to do that than to take Nancy tarantula hunting? Here, Nancy is a little less convinced that this stunt is a good idea. While searching for spiders with Baz and some local assistants, Nancy zones in on the poisonous aspects of the creatures, which serves as enough of a reason to stand away from them. 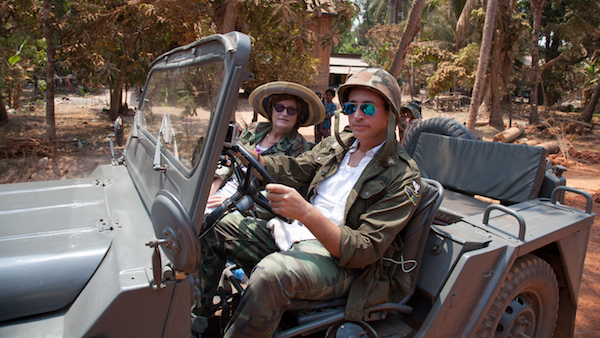 However, Baz maintains his brave face and rounds up some tarantulas. It’s a good thing he did, you see, because this is dinner. After Nancy helps fry up the scary collection of spiders, she doesn’t have much trouble eating them. As it turns out, the right amount of spice can do wonders on just about anything!

The following day, Baz aims to help his Mammy get past one of her biggest fears: heights. While Baz and Nancy have already completed various adventures that involved getting her high in the air, going zip lining 100+ feet above ground is a whole other beast. Throughout her preparation, Nancy shows tons of hesitation and uncertainty. Baz, however, soon turns into the ultimate coach. He champions how safe the activity is, all the while convincing Nancy to put her trust in the professionals that’ll help her zip from one tall tree to the next.

When Nancy finally lifts off, Baz’s excitement is through the roof. Flying down the line, Nancy remains slightly more reserved, but appears to be enjoying the ride. Once at her landing spot, Nancy holds on tight to the tree. But, her grip wasn’t able to last long, as it soon became time to ride one more line.

On this second trip, Nancy is “wooing” all the way through. Yes, she was asked to “woo” it out, but you could see the joy in her face as a fear gradually became less frightful. As for Baz, he is unable to hold back the pride and excitement he has for his mother – a mother who is satisfied with herself, yet now requesting a double brandy at 11am. 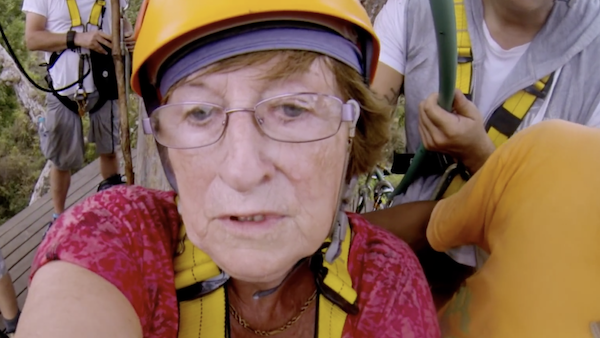 One major fear down, another to go: getting under water. Although Nancy has already been in the water with Baz during a recent shark-infested activity, this Irish Mammy is still unbelievably afraid of water. She can’t swim and her fear of drowning is very real. Rational or not, Baz wants to help her conquer this phobia as well.

Considering Nancy’s fears and her inability to swim, a scuba diving instructor decides it’s best to give her a scuba lesson in a pool, as opposed to the ocean. Even in the safe confines of a rather posh pool, Nancy has trouble trusting the safety of her head going beneath water. Yes, she is connected to a scuba diving tank that’ll provide her with oxygen, but that doesn’t at first stop her from feeling apprehensive.

Eventually, however, Nancy’s trust in the process grows and nets her an impressive 32 seconds under water. Her bum touches the bottom of the pool and Baz’s emotionally touched by his mother’s willingness to trust him in moments such as these. Nancy, as you could imagine, feels elated by this accomplishment.

Before taking a break and heading back to a calmer life in Dublin, Baz has one more major escapade planned. There are no heights involved, or having to stick around under water. This time, it’s the solid ground of a deserted island that’ll greet Baz and Nancy. Together, the duo will have to live for 24 hours on an island with only the most basic of supplies in reach: tools, materials for a shelter and a live chicken for food. Nancy, however, quickly thwarts the idea of chopping up a chicken she’s just seen alive and well in front of her. So, fish winds up on the menu instead. 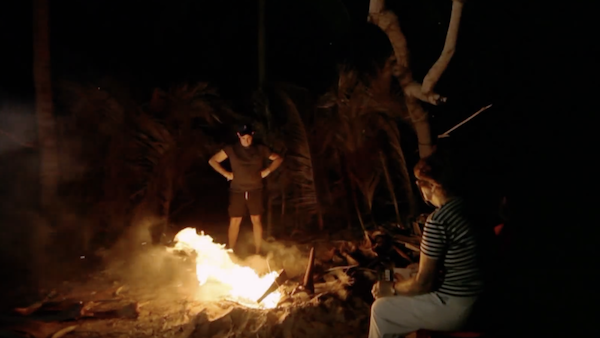 After a day filled with building shelter, tracking down mangos and coconuts, building a fire and getting ready to brave an evening storm, Baz and Nancy’s survivalist experience proves rather tame, albeit satisfying.

It is on this island that Baz and Nancy truly come to grips with the positive experiences they have shared together on a whacky and wild trek to various points of the globe. To say that Baz and Nancy’s relationship hasn’t expanded 10-fold would be like saying Baz actually wanted to kill his mother on this trip.

Concluded Baz: “I see a smile [from Nancy] that I’ve never seen before.”

Thank you for watching the first season of “50 Ways to Kill Your Mammy”! Please be sure to tune in on Monday, October 17 at 8pm ET/5pm for the season two premiere!