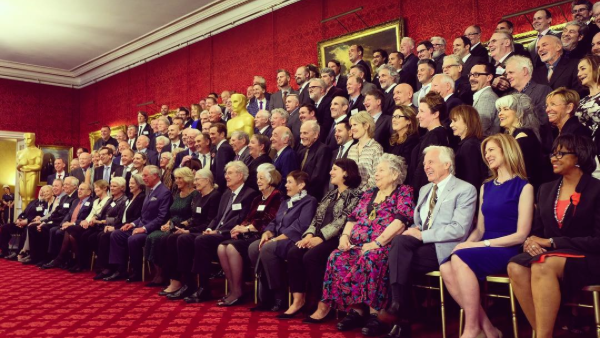 The evening, which was designed to “celebrate the work and accomplishments of British filmmaking,” featured a sizeable collection of A-list actors and actresses, as well as those who have worked behind the scenes as directors, visual effect artists, sound mixers, costume designers, as well as hair and make-up stylists.

During the evening, Prince Charles and Camilla schmoozed with the likes of Sir Michael Caine, Dame Judi Dench, Maggie Smith, Colin Firth, Jeremy Irons, as well as Emma Thompson who – as the video below will show you – enthusiastically and hilariously greeted the Prince of Wales.

Later in the night, all of those in attendance would gather for a group photo, complete with a giant Oscar figure housed in the middle. Instead of cheese, everyone was asked to yell “whiskey!” as the shot was being taken.

On April 21, Prince Charles’ mother, Queen Elizabeth II, celebrated her 90th birthday in style! Click here to have a look at the festivities!

For those who love everything Royals-related, please be sure to tune in on Monday, May 9 at 9pm ET/6pm PT for an encore presentation of the astounding documentary, Cameraman to the Queen. This film offers fascinating insight into the work of royal cameraman Peter Wilkinson, someone who has been present at the Queen’s public engagements for 18 years. This documentary highlights his unique relationship with the monarch and captures his work during a state visit by the Chinese president, at a royal garden party at Buckingham Palace, on a visit by the Queen to Essex, and in Scotland on the momentous day when the she became the longest-serving monarch in British history.