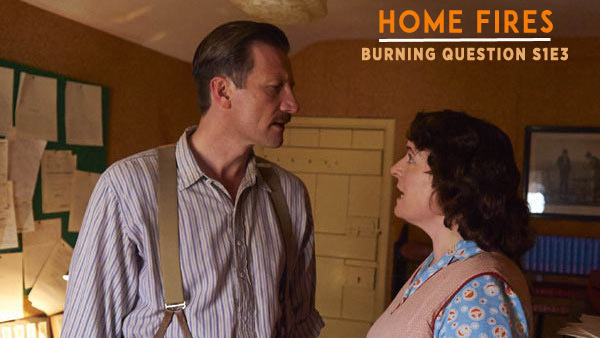 Welcome to this week’s “Home Fires” Burning Question! Before reading and participating in the poll, do note that there are many spoilers ahead. This episode of Home Fires is available to watch online through Thursday, March 18, 2016.

As the war begins abroad and residents of Great Paxford start getting shipped out to fight, a more localized, one-sided battlefield has been getting uglier by the day: the Simms household.

While Pat Simms (Claire Rushbrook) gains much pride and confidence from her involvement in the Women’s Institute, her husband Bob’s (Mark Bazeley) fledgling writing career and desire to be frighteningly controlling continues to surge. Although most of the conflicts between the two have involved Bob laying down mountains of verbal abuse toward Pat, there had yet to be any physical intimidation levied – until now.

Seeking writing work where he can get it, Bob is enthused by the opportunity to cover an event at the town hall for a local newspaper. Shortly after arriving with notepad in hand, Bob is surprised to find that Pat is speaking at said event on behalf of the Women’s Institute. Although Bob keeps his temper in check publically, it’s easy to tell that he’s seething on the inside. 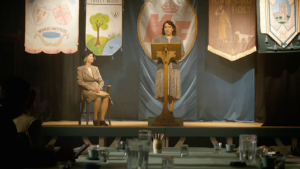 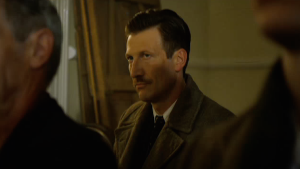 Pat, a nervous public speaker, gains more and more self-assurance as she addresses the hall. She sees attendees embracing her points and taking them seriously. Coming from a household in which she’s forced to feel low and alone, Pat is positively beaming over this experience.

Back at the house, Pat continues to quietly radiate over the day’s happenings as she and Bob finish their dinner. Within moments, Bob begins to plot his assault. First, he asks for Pat to give his article a lookover. For a moment, she appears flattered by Bob’s interest in seeking out her opinion.

During her perusal, Pat quickly realizes that the article involves her – she begins to emotionally shrink. 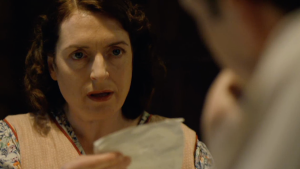 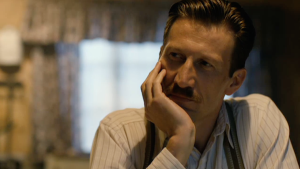 Bob: “Why didn’t you tell me you were giving a talk this afternoon?”

Pat: “I know you’re not interested in the W.I. I never dreamt that your assignment would be to cover the same event.”

Bob: “Imagine my surprise when you took to the [podium], papers in hand, quite the public speaker. Then, imagine my embarrassment when you actually began to talk. You embarrassed yourself, you embarrassed me.”

Pat: “How have I embarrassed you?”

Bob: “I now stand to be accused of nepotism by [my editor] when he sees my wife’s name in the article.”

Bob: “And have some silly b*tch from the meeting writing to him, accusing me of getting your name wrong? This is what happens when you get too big for your boots, Pat. You ruin everything.” 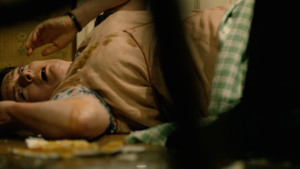 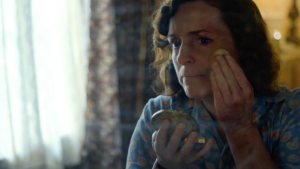 After further attempts at cooling Bob down, Pat is soon mightily smacked in the face by her enraged husband. On the floor in pain and shock, Pat is left to endure further verbal ammunition launched by Bob. This, fortunately, is interrupted by a knock on the door.

Upon opening it, Bob is greeted by the Campbells. Bob, of course, gives a concocted excuse for the commotion they heard from outside. When Bob gives a different excuse to Frances later on, the suspicion about what’s really going on in the Simms household begins to rise.

Pat realizes she is in a terribly abusive arrangement with Bob, but is unable to find her way out of it. If this continues, it appears that things could get much worse.

With that in mind, do you think Pat will eventually escape Bob’s abusive ways?

Do some of the cast members of “Home Fires” look familiar to you? If so, please do have a look at our Where You’ve Seen them Before feature.