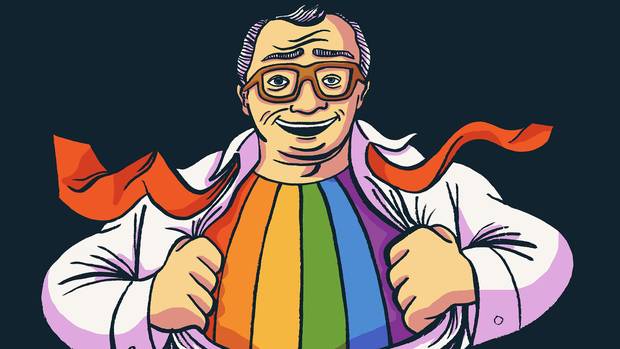 I have known for as long as I can remember that I am gay. Of course, I didn’t always have a word for it, but I knew I liked other boys in ways boys weren’t supposed to like boys.

My first crush was on Peter, whom I met in kindergarten. I still remember him – dark eyes, dark curly hair, olive complexion of the southern Italian. He was a strong, athletic, charismatic boy with whom, in my childish way, I had fallen in love.

Throughout high school and university, I managed to keep my true identity secret. The 1960s were simply not a time for anyone but the strongest personalities to “come out,” and I was definitely not strong. But by 1969, when I got my BA, I was so confused and feeling so isolated that I sought psychiatric help.

The doctor I saw believed that homosexuality was a pathology and that he could cure it. The cure he offered was the “love of a good woman” (his words), and so I set out to find one such good woman. I did so rather easily, and a year after graduation I was married.

My main desire was that no one ever find out that I was queer, an invert, a social misfit, a wrong person. My other desires were men – their chests, abs, body hair, genitalia.

I told my fiancée about my attraction. She cried, swore undying love, and together we set off on a journey in which we believed that love could conquer all, including curing homosexuality. We were in our early 20s, and naive. Thirty years and two children later, we were the poster couple of marital bliss. But though I was successful in my profession, a good father and – at least publicly – a good husband, I felt that I was a fraud.

A midlife crisis in my 30s, apparently over a minor issue at work, which sparked a depression, should have been a warning sign, but I couldn’t discuss my homosexuality with this new psychiatrist.

Finally, as I entered my mid-50s and started looking toward retirement, my inner turmoil over my hidden identity began to come to the surface. I had come out to my wife in an emotionally exhausting moment, but didn’t do anything about it.

I took early retirement and went to Mexico to teach, while my wife stayed at home, hoping that distance from my life in Toronto would help me sort things out. But I was still in hiding. Nothing much changed in Mexico except the weather, and I came home after only a few months.

Then one evening, while watching the sitcom Will and Grace, the moment came. It was the episode when the ultimately stereotypical gay character Jack was to come out to his mother (a silly situation because Jack was so gay and, let’s face it, mothers already know, don’t they?). At the last moment, Jack rushes out onto the balcony, Will following. Will says: “Jack, do you remember when I was coming out, you said to me, ‘Aren’t you tired?’ and now I’m asking you: Jack, aren’t you tired?”

It was as if the character was talking directly to me. Yes, I was tired. Tired of being on a stage, wearing the mask and costume of the hetero father, playing the part of a person I simply was not, could never be. I knew that I needed to be real, whatever that meant. No more masks.

I discussed it with my wife, and we agreed that at the end of the following summer, around our 33rd wedding anniversary, I would find my own apartment. We informed the kids, but no one else. In the summer after my 56th birthday, my wife and I travelled together to British Columbia to spend time with our adult daughter. It was a wonderful holiday, and we ignored the looming deadline of what would happen upon our return home.

We told our closest friends we were separating, but not the reason. It was my friend Brian to whom I next “came out.” He and his wife had been our friends for more than three decades. Not knowing why we were splitting, Brian came over to my apartment hoping to persuade me to seek marriage counselling. Before he could begin, I said: “Brian, I’m gay.” His response: “Oh, what a relief.” At least now he knew why we were ending a “good” marriage. With his response I found acceptance, not just Brian’s but my own as well.

For more than a decade now, I have lived truthfully and honestly. I still have excellent relationships with my children (both now married). I’ve maintained a friendship with my ex-wife and have formed a long-term relationship with another man. Through my friends and family, I have found love for myself as I am.

Do I regret the years of subterfuge? I know that had I been an openly gay man in my younger years I would probably not have had the career I so enjoyed and the wonderful family I now have. You can’t look back with regret. It was what it was. But those three words, once so impossible for me to say, have become almost a mantra: “I am gay.”