The Middle-Age Guide to Growing Up: If You Can Say It You Can Climb It - CARP
Join Donate Sign In 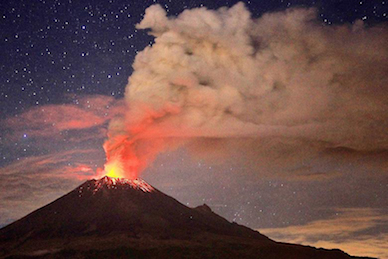 Mt Popocatepetl hangs over the Mexican city of Cuernavaca like a towering cloud over a sunny walled garden. Popo has been an active volcano for thousands of years, and occasionally belched during the years I lived there in the 70s.

I was running an amateur theatre group for the local expat Arts Centre, and I was having fun. I knew all the Canadians and Americans and Britons in town, and most of them either appeared in our shows or attended them.

Cuernavaca was known as Cuauhnahuac when it was an Imperial Aztec resort town, and that is the name it carries in Malcolm Lowry’s seminal novel “Under The Volcano”, the volcano being Popo. Everyone in town had read the book, dined at the cafés mentioned in it, walked the parks and lived on the streets. In the book, the antihero, Geoffrey Firmin, the Honourary British Consul in Cuauhnahuac, spends the Day of the Dead (November 1) getting historically and monumentally drunk and ruining his already tattered life.

That was not my experience of Cuernavaca. It was a city full of lovely people with a beautiful climate and thousands of stories. One day in the Zocalo, while sitting at a café, I saw a black Mercedes go by with Henry Kissinger and the newly former Shah of Iran in the back seat. Joni Mitchell was in town recording her album Mingus. Ali McGraw and Dean Martin’s son, Dean Jr. filmed Players, a tennis-based bodice ripper, on the outskirts. As it turned out, I ended up escorting Ms McGraw around town for a few days, as she hated everyone on the film.

I had lots of girlfriends, and there were always new recruits coming into town to teach ESL as the ones I knew left, moving on down the continent along the Gringo Trail. There was Cathy, a guitarist who toured a very nice little one man Shakespeare show with me, playing ballads between me doing the chestnuts. There was Gayle, the Amazon, six and a half feet of beauty and boobs. There was Kathy, wiry, skinny, intense and furious in bed. There was a girl so blonde, with eyes so green, and a Danish accent so perfect, and a body so tastefully sculpted and curved that I’ve clean forgotten her name. Life was sweet.

My buddies were mostly Matt and Simon. Matt was from Texas and taught ESL. He wandered into an audition, and was amazed to find a fellow Grateful Dead Head in town running a theatre, of all things. He was solid, straightforward and my best friend. We shared our weed buys and our part-time girlfriends. He knew more about the seamy side of the country than I did, and his Spanish was faultless, unlike mine.

Simon was an austere Englishman, a remittance man if ever there was one. He was a commercial airline pilot. He had flown in Scotland for Caledonian Air, then he didn’t anymore. He never told me why. He was in Mexico trying to get a job with either of the national carriers, Aeromexico or Mexicana, but both airlines almost never hired non-nationals. He was in the process of getting his Mexican citizenship in the hope of filling this requirement. I got the sense that Simon had blotted his copybook so badly, there were few places that would hire him.  I’m not sure what Simon subsisted on but he had a little apartment where he lived alone and he dealt in that staple of the shadier side of expat society, selling Scotch Whisky in bond to mature at the distillery in the keg which you (ostensibly) own. Most places, it’s a racket, and I think Simon might have been drinking his inventory.

Simon, Matt and I decided we needed to get out of town and challenge ourselves. Popocatepetl is the second tallest mountain in Mexico, just less than 18,000 feet, and taller than anything in North America. And, as a volcano, it wasn’t a technical climb, just a tiring one. Here was a challenge we could accept. We loaded into Simon’s Renault one morning and headed east from town into the foothills of the volcano. Our first stop was Tepoztlan, a unique Aztec village under the eaves of the mountain. Tepoztlan is a village where everyone still speaks Nahuatl, and the Spanish-speaking Mexicans from the Capital are the foreigners. Tepoztlan has been an important regional centre for more than 1000 years and is thought to be the birthplace, not only of the god Quetzalcoatl, but of Mezcal as well.

We stocked up on food at the market in front of the church on the town square. This church had broad steps like a pyramid leading up to the doors. No one ever went through the doors, the ceremonies (in Nahuatl) were all performed on the steps, and involved rites and icons that certainly weren’t Catholic. The steps and the door of the church were decorated with white cloth dolls the day we were there. Tepoztlan is the Brigadoon of Mexico, existing completely in another age. We climbed the stone stairway cut into a cleft in the cliff that hangs over the village and looked out from the platform of one of the most ancient temples in a country full of ancient temples. Below was the village, and off to the east was Popo, now filling our field of vision almost completely. There was an idle drift of vapour coming from the crater at the peak, and some clouds lingered on the flanks. There was snow on the crest. We wondered if the jackets and sweaters (my entire warm wardrobe) we had brought would be warm enough.

The rutted back road up the flanks of the volcano tested the suspension of Simon’s Renault, and we spent a lot of time walking along beside the car guiding Simon along the tops of the ruts. It was late afternoon by the time we got to the saddle between Popo and its sister volcano to the north, Ixtaccihuatl. This is a famous spot, for here it was that Cortés stood and looked down on the might of Mexico, the world’s largest metropolis, for the first time in 1519. We stocked up on bottled water and brandy in the village, got some cold beers, had dinner and headed out of town to camp for the night. It was considerably colder than we had anticipated (the saddle lies at about 10,000 feet) and no one slept very well.

This was just as well, because we were awake before dawn and ready to go. We packed our bags in the car and took just food for one day and lots of water (and our sweaters). There was a trailhead with a series of signs warning of dangers (cold, ice, landslides, eruptions) and the trail was already busy with hikers. From the saddle, the route up the mountain is basically a long spiral slog around the cone until the path gets to the brim of the crater. Because the path spiraled up the mountain, the pitch wasn’t too great, but it was much longer than the direct route.

After the first hour, we were exhausted, and we were barely one quarter turn around the cone. We paused, heaving for breath, and ate breakfast of fruit and hard-boiled eggs. We slogged on that way for 5 hours, getting to about the 16,000 foot mark. That was it. No mas. It was just after noon, and we had to get down the mountain and back to Cuernavaca. Besides, our tongues were sunburnt. This is far more serious than you might think. At 16,000 feet, the UV is toxic, and when you’re slogging up a mountain through crushed lava, your tongue hangs out. And when your tongue has third degree burns, you can’t talk or eat.

As anyone who has tried climbing up and down a Mesoamerican temple or a volcano knows, going down is actually more tiring then going up. On the way down, sun behind us so our tongues were no longer being toasted, I spotted something way down below the path, in the brush on the side of the mountain. It was round and bright safety orange. Simon and Matt, exhausted, and in a hurry to get home, implored me to leave it, but it was too enticing. Safety orange is meant to be seen.

I headed straight down the mountain towards the object, galloping through the loose scree. This was a much steeper descent than the path took and it got me to the tree line. When I arrived, I found a very expensive, very warm, very heavy duty Himalayan expedition down parka in stuff sack. Some serious mountaineer, not an amateur like us, had watched it bounce away down the mountain and decided it wasn’t worth his time retrieving it.

We got home late that night, sore and sunburned all over, but especially on our tongues and foreheads. We were crazy to allot one day to 8000 feet of vertical, to go as ill-equipped (I think I wore boat shoes), to have so little regard for our skins in the sun, and to have so little in the way of warm gear. After that trip, though, I had the warmest coat in Mexico. And, when I left the country later that year and returned to Montreal, to a winter that routinely challenged -30 degrees on the thermometer, I still had the warmest coat in the country. It saved youngest sister’s life one winter when she managed a Montreal restaurant and had to cash and close at 3 AM every night,  walking home in -40 degree weather.

I kept that coat for twenty five years, and finally let it go just a few years ago. The one little bit of the corner that had been exposed in the stuff sack on the mountainside had faded so severely that it wore out, and the coat began to leak down, barely stemmed by duct tape. The coat got shabbier and shabbier, still safety orange and hard to miss in a crowd. It finally had to go.

Lessons learned. Don’t climb big mountains for a lark. Do get off the beaten path if you see something interesting, you never know what you’ll find.