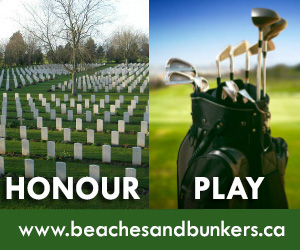 isa trip of a lifetime– for individuals, couples, your foursome,your family, your friends. This is anopportunity for every Canadian tohonourour country’s past, our fathers and grandfathers… and play the game we love.

Click on this link for more information, including the special offer for CARP members:

We are delighted and extremely lucky to have Terry Copp lead this tour.

A long-serving and charismatic professor at Wilfrid Laurier University and the founder of the Laurier Centre for Military Strategic and Disarmament Studies, Copp is the leading scholar of Canada’s military role in World War II and an influential advocate for military history in both military and civilian post-secondary education.

His work on battle exhaustion, published in 1990; his study, The Brigade (1992); and his two important volumes on the Canadians in Normandy, Fields of Fire (2003) and Cinderella Army (2006), have led to a reinterpretation of Canadian soldiers’ effectiveness in 1944 and 1945.

Copp’s interest in the battlefields of northwest Europe has also led to the creation of battlefield memorials, the conduct of tours for teacher and students, and the publication of invaluable battlefield guides to Canadian participation in both world wars. He is the founder of a quarterly journal published by the Laurier Centre in co-operation with the Canadian War Museum; entitled Canadian Military History, it is Canada’s leading journal of military history. Find out why the Oxford Companion to Canadian Military History calls Copp a “charismatic teacher.”