The Middle-Aged Guide to Growing Up : Family Hour - CARP
Join Donate Sign In

Editors Note: A. Boomer is the alias of a CARP member who shares his experiences about growing up and growing old every two weeks in the CARP ActionOnline newsletter.  He is back by popular demand from our readers after publishing his first series, the The Caregivers Diary.  For newer readers who might be unfamiliar to the Caregivers Diary columns, they are available in archive. Over the course of a few years, the writer described his experiences caring for his mother, father, father-in-law and mother-in-law during their final days.  Since the passing of his father, he now cares for himself.   Hence the name of his latest series The Middle-Aged Guide to Growing Up, in which he will tackle, among other things, the transitions he is experiencing, taking care of his health his finances and of course, living life to the fullest. 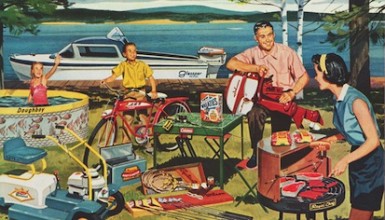 I’m a Boomer, born when the Boom was booming, and I’m 60 now. I didn’t arrive alone, I have 4 siblings, 2 brothers and 2 sisters, Boomers all.

Number one son is the typical first-born. Hard-working, conscientious, apt to be troubled by his responsibilities. Hes painstaking, changes his own oil, and does it about twice as frequently as needed. I love him, and I need him, because I’m not him. I’m the classic second born son – carefree, irresponsible, slacker; think Prince Harry to my older brothers Prince William. Oldest brother went to an Ivy League school, excelled and then went to law school. Hes now a lawyer in the authentic cowboy west, his clients are ranchers, he hunts two months a year and hes very happy with his life. That is, when the dark mountain winter isn’t crushing his soul and making his days long.

He and his wife, an exciting woman, travel a lot, usually to kill things; birds, fish, ungulates. They spend a month at Christmas basking in the sun in Arizona, camping with the dogs. They’ve been to Antarctica whale-watching, catching bonefish in the Bahama Flats, scoping jungle birds in the cloud forest, watching jaguars in the Pantanal. They have no kids, just hunting dogs they’re devoted to.

Im number two son, and, as I said, a typical second son. Impetuous, arrogant, willful, and I didn’t even finish school. Neither high school nor university. I just got tired of both. It hasn’t stopped me from doing basically what I wanted to do all my life. Prince Philip spoke to my older brothers graduating high school class You don’t have to go to college if you don’t want to; look at me, I never went to college and I did alright. Turns out, in my case at least, he was right. I married a smart, tough woman who didn’t think much of me when we first met. I love her desperately. In our case, cats, no kids.

Number three is younger sister, who also lives in the west, about two six-packs drive away from my older brother. Shes married to a rancher. Shes an artist. Shes been a whale researcher, a naturalist, a field guide illustrator, and a self-trained scientist. Shes been all over the world, from the Humpback calving grounds off Silver Bank in the Caribbean to dredgers in the Delta to the seal colonies of Elephant Island. Shes doing what she wants to do now, nestled in a fold of the mountains, painting cowboys, horses and steers. She and oldest brother are very tight and see each other all the time. Her husband has two grown sons from a previous marriage, but they have hunting dogs now, no kids.

Number four is my youngest sister. If she weren’t fourth, you’d think she was a first son. Ambitious, earnest, over-achieving, hard-working, relentless, driven, all these words apply. Shes gay and is married to a warm woman who must have a lot of patience because youngest sister is no pushover. When she formulates a plan, other considerations fall away, and events take on a fatalistic certainty. Resistance is useless. This has a downside, in that youngest sister is often troubled by a world which doesn’t cooperate exactly with her expectations, leading to tension and stress. She married into her wife’s existing family of three kids, but has none of her own.

Number five is youngest brother, and hes a treat. He was born at the tail end of the baby boom, in its very last years, and thus has very little age-based competition. He was an afterthought in our family, and has always been given a pass where the rest of us had to work for our opportunities. Hes warm, gregarious, not particularly rigourously educated but deeply smart, and emotionally connected. He has always seen himself as the uninvolved sibling, the one with no dog in the hunt, the one who can reconcile four other strong personalities. It doesn’t always work, but he IS the only family member left who still speaks to all the other siblings (we have our rolling disputes, first with one then another). Youngest brother is a musician, he plays in a band that’s been around as long as U2. He works days in IT, but, really, hes a musician. He has a long term girlfriend (he was married once), but neither of them has kids.

Five adult children of two veterans of World War II, stretching from the front wave of the Baby Boom to the tail end, spanning 10 years from 1952 to 1962. And no offspring among us. None. My parents never had grandchildren (I don’t think they forgave us for that). We were well-raised, but chose not to raise any more generations. Selfish? Perhaps were doing our bit to lighten the load on the next generation. Maybe we just all wanted to keep our carefully-crafted happiness for ourselves. I never particularly wanted to share my life with a junior version of myself, I am annoying enough on my own. My siblings similarly are more interested in fine-tuning their own happiness than sacrificing for children. It just as well; I’m afraid our kids would never have had it as good as we have it.