This past December, Kara Hawkins stepped forward to receive a $2,500 award recognizing her as the highest-ranking applicant in Canada for a graduate scholarship in the field of aging.

She accepted the Canadian Institutes of Health Research Institute of Aging Recognition Prize in Research in Aging at the annual conference of the Canadian Association on Gerontology in Montreal. The prize, which augments major scholarship funding she has already received, included the money, an invitation to the conference and, best of all, a chance to adjudicate research posters. 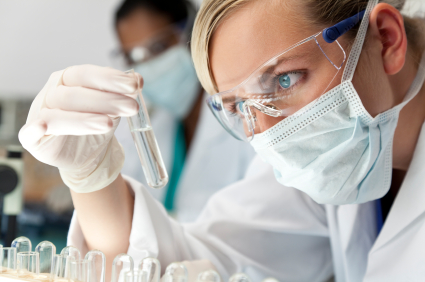 “It’s perfect timing for me,” says the first-year doctoral student in the Faculty of Health‘s School of Kinesiology & Health Science. “I’ll be able to see what’s going on in my field. Winning this award has been very motivating.”

Hawkins started work this fall developing and evaluating a clinical assessment tool to measure visuomotor integration (hand-eye coordination) that could lead to early detection of Alzheimer’s disease. For this, CIHR is funding her research to the tune of $35,000 a year – $30,000 in salary plus $5,000 research allowance – for each of the next three years. It’s the biggest scholarship Hawkins has ever received.

Sit down with Hawkins at her corner desk in the office she shares with other graduate students and you’ll notice only one image taped to the wall next to her computer. “That’s my brain,” says the 27-year-old of the vertical MRI scan taken this fall in York’s new Neuroimaging Laboratory, located in the Sherman Health Science Research Centre.

The brain. Hawkins became fascinated with it early in her undergraduate years. ”You can’t understand behaviour without understanding the brain. That’s what interested me most.” She started studying psychology then branched into kinesiology. It was a natural detour. “I’m an athlete,” says the former varsity goalie who now plays forward for the Aurora Panthers and for the Ice-O-Topes, an intramural team at York. “I wanted to learn how the brain controls movement.”

After graduating in 2006, she jumped at an offer to work as a neuropsychology assistant at Baycrest, a centre specializing in geriatric research and care. “I’ve always been interested in clinical applications,” says Hawkins. Baycrest sparked an interest in aging and two years later she returned to York to pursue a master’s degree and neuroscience graduate diploma, delving deeper into the neurophysiology of complex motor control. She won three scholarships to do it and graduated last spring.

Now a doctoral student, she’s back in a clinical setting. At York Central Hospital, she is collaborating with the geriatric physician to diagnose aging patients who show signs of mental deterioration. Currently, doctors use language, cognition, memory and attention tests to score patients’ mental status out of 30. It’s an imprecise science, and Hawkins has developed and is testing a new measurement tool that could be more precise.

The tool looks like a laptop. There are two touch-sensitive screens, one vertical and the other horizontal (where the keyboard would normally be). The patient is instructed to reach for a target that appears on the vertical screen, at first directly with her hand and then more indirectly using the horizontal touch screen to manipulate a cursor. The test is not educationally or language biased, and Hawkins can determine which part of the brain the patient is using and the level of dysfunction based by the accuracy and speed of the response.

The brain is a complex network of communicating parts. When someone has dementia, the lines of communication deteriorate and misfire. Hawkins’ test aims to detect the breakdown in the visual-motor and cognitive-motor communication lines. “These touch-screen tracking tests tap into that.”

Hawkins is currently trying to recruit 60 to 90 patients diagnosed with Alzheimer’s disease and the same number who are aging normally. Over the next three years, she’ll test her diagnostic tool. She is particularly interested in finding out if it can detect early and more subtle stages of Alzheimer’s disease. Interested participants in the Toronto area may contact her at [email protected]

The earlier we can catch signs of mental deterioration, the more time there will be for intervention that could delay the onset, says Hawkins. Earlier and more precise diagnosis could lead to better education and better care for patients, she says.

Hawkins, now a member of the Centre for Vision Research, is doing her research under the supervision of  Prof. Lauren Sergio, an expert in hand-eye coordination and director of York’s Sensorimotor Neuroscience Laboratory. When she’s finished her PhD, she hopes to continue exploring diseases associated with aging.